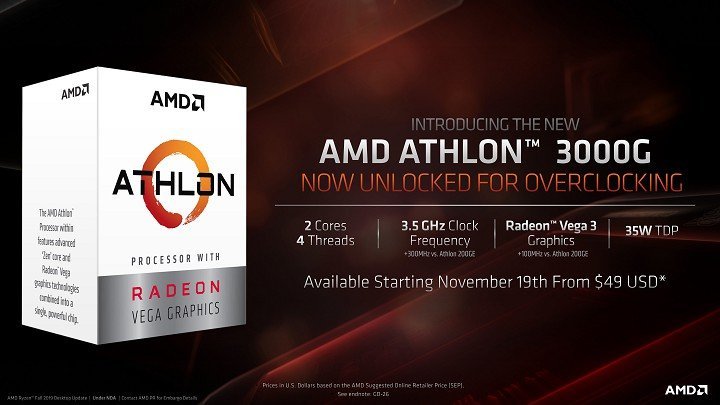 AMD has officially released the new Athlon 3000G, which is the AMD’s most affordable Zen-based processor with the price tag at just $49. This processor is fully unlocked for overclocking which makes it a good option for gamers who are more budget-orientated to buy one of the cheapest CPUs available on the market.

As per the official information, provided by AMD, the Athlon 3000G has 2 cores with SMT support for 4 threads, dual channel DDR4 memory, packs 4MB of L3 cache and it fits inside the AM4 socket. It operates at a base frequency of 3.5 GHz and with a TDP of 35 W. The CPU is based on AMD’s 12nm Zen+ microarchitecture with an integrated Vega 3 graphics engine with 192 cores and working frequency of 1100 MHz, which contributes to the total performance. Once overclocked to 4.0 GHz, the performance of the CPU becomes much more competitive.

Testing the AMD Athlon 3000G is showing that the CPU is a good option with overclocking allowing it to perform beyond its price point.